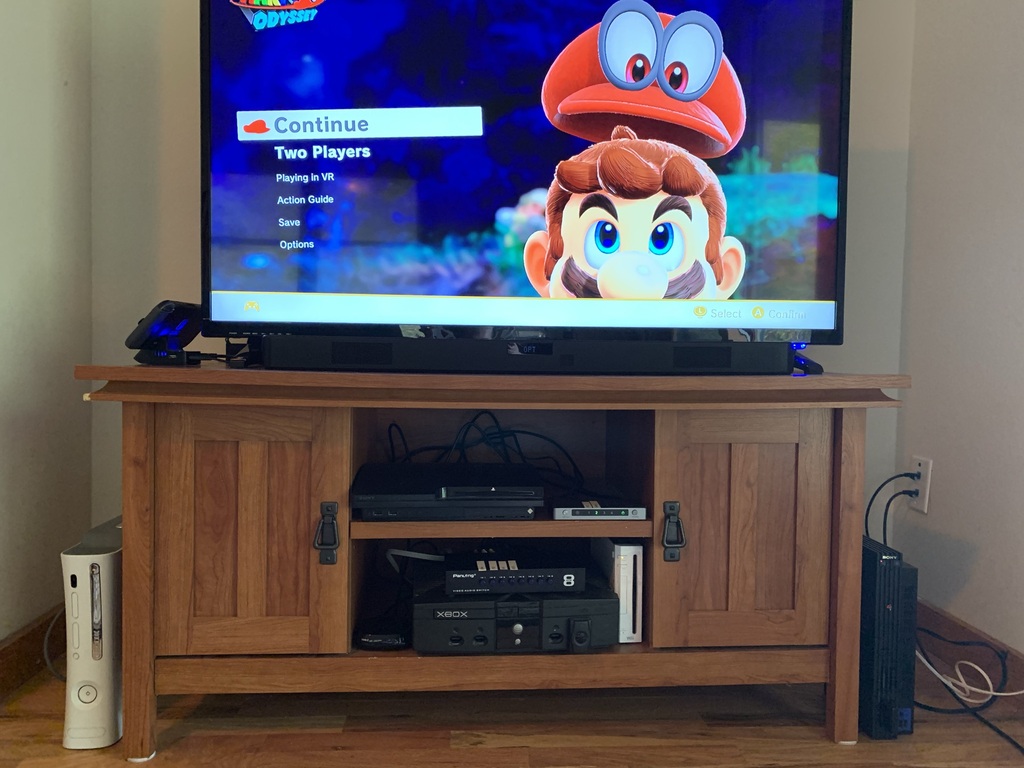 The Big House game room has the goal of being the ultimate console gaming experience, of yesterday.

No modern consoles will be there because if they are a modern console they’d probably be at home. But the Big House is the perfect spot for retro consoles to go and retire. The Big House website will have more information about what games are there, this post is much more about the technical aspect of how this is accomplished and goals for the future.

I did go through a lot of thoughts about if and how to get network connectivity to these devices. I could put a switch there easily and wiring the devices for network access would be easy enough, however nothing there at this point NEEDS internet access and I realized that if an xbox 360 had access to the internet, it would probably want to use the internet in some capacity, perhaps to download an update for a game or a system update or something else. The Big House has such limited bandwith and available data, I decided that none of these consoles deserved to get online.

I did bring down an HDMI splitter that seemed to work for a day then became unresponsive, which makes me sad. At this point I’ve got the Playstation 3 hooked directly to the TV then bypassing the HDMI splitter which I brought home.

The old composite video cable games are all fed into a generic AV splitter, like this one. This means things are simple enough to swap between the game consoles, so if someone is interested to play Halo they can easily push a button and be on their way.

The television has composite in, however this is shared with the component in connections. I did decide to allow the Xbox360 to connect via component cable, so I had to get a composite to HDMI adapter that seems to technically work. I do have a HDMI xbox 360 at home I will probably bring down if and when a Xbox Series X comes into my life, along with the xbox One at home then I’ll need to revisit the no internet aspect…but anyway.

This was one of the setups I had toyed with but ultimately decided it looked a bit too crowded. It will be interesting in a few years when there is an Xbox One there also – crowding might become unavoidable.

I won the Legend Slayer achievement in Halo: The Master Chief Collection for 18 TrueAchievement pts https://www.trueachievements.com/gamer/dudeimhilarious

I won 3 achievements in 2 games for 63 TrueAchievement pts https://www.trueachievements.com/gamer/dudeimhilarious

I started the game The Outer Worlds (Windows) #TrueAchievements https://www.trueachievements.com/game/The-Outer-Worlds-Windows/achievements